Blogs Posts, Local Marketing: In the Trenches
Posted on July 31, 2020

When it comes to local PPC, less is more.

More specifically, fewer ad groups are better than a lot of ad groups. The reason for this is because your daily budgets are smaller with local campaigns. When structuring your ad accounts, you’ll want to keep this important idea in mind. 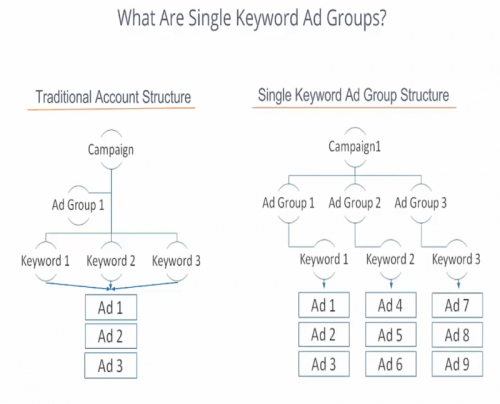 Now, I know this is a controversial statement; it cuts across the grain of the most commonly held PPC beliefs. Nearly all experts will tell you that Single Keyword Ad Groups (SKAGs) are the way to go—that breaking down your keywords into as many ad groups as possible is the best practice when it comes to structuring a PPC campaign. It makes your keywords more relevant to your ad copy, gets you a better click-through-rate and a better quality score with Google, and you pay less for clicks. In short, it’s the bee’s knees. To do anything otherwise would be sacrilege.

But after running PPC campaigns for 4+ years for all kinds of businesses—printing shops, tutoring services, carpet cleaning businesses, estate sales, IT companies, your local barber, and everything in between—if I’ve learned anything, it’s that what works in theory and what works in practice are often two very different things.

But talk is cheap—when it comes to PPC, it’s all about the numbers. So, what story do the numbers tell us about these two approaches?

Benefit #1: Let Your Best Ad Group Do the Work

Years back, we worked with a large printing & shipping chain. They wanted to run campaigns for a wide multitude of printing services—banner printing, brochure printing, flyer printing, business card printing, yard sign printing, vinyl printing, and so on and so forth. So, we built a PPC campaign template which designated ad groups not only for each of these services, but for all the relevant ways a user could search for them. In essence, this was the SKAG approach.

Using their flyer printing service as an example, we broke down the keywords into the following ad groups:

Using this same approach for all of their services, we wound up with a massive campaign. When it was all said and done, we had a total of 95 ad groups! We ran 40 campaigns in all, each for a different local market, using small budgets that varied between $150 – $300. We let the campaigns run for a while and collected as much data as we could. Months later, we used the data to make a brand-wide optimization.

What did we find?

The ad groups for more general searches like “printing near me” and “printing services” generated the most impressions. Meanwhile, the more specific search terms, like “large format printing company,” fell to the wayside, and averaged half an impression across all of our locations. This is because the more commonly searched keywords received all the clicks and ate up all of our smaller daily budgets, leaving the less popular ad groups with no chance to be seen.

So, we took these ad groups and consolidated them. Semantically, we were able to synthesize them into 38 ad groups. But this was still entirely too many ad groups for a local campaign with a small budget. So, we took this a step further, and broke it down to which ad groups received the most leads across all the campaigns:

In the 3 months after making this change, we saw the following results:

So, our client got more total leads and paid less for each lead they received. When operating on smaller margins like printing products, cutting this cost per lead amount was crucial for a good marketing ROI.

The conclusion here is that local campaigns are all about being selective with which ad groups you want to show using your limited budget: You want to pick the best ad groups and let them shine. By selecting only 12 ad groups to run on our small budgets, we only showed ads for the best keywords—the ones that converted into leads.

Benefit #2: Give Your Long-Tail Keywords a Chance to Shine

We had a similar situation with a local tutoring client. They offered all kinds of tutoring services – SAT prep, ACT prep, math tutoring, reading and writing tutoring, chemistry, physics, and more.

Taking their ACT Prep service as an example, we used the traditional SKAG approach, and broke down this service into the following ad groups:

After months of running these campaigns, the results were nowhere near where we wanted them to be. So, we took a similar approach to our local print shop client and tried consolidating the ad groups. The 6 ad groups above were consolidated into one, overarching ad group for “ACT Prep.” After doing the math (without the tutoring help), we found a rather interesting effect.

So, what is happening here?

It all comes down to the daily budget.

In this case, the ad group for the root query, “ACT Prep,” was eating up the spend every day, so the more detailed, long-tail keywords in their own ad groups, like “ACT Prep Near Me,” were not getting any traction. However, by grouping all these keywords together in one ad group, the long-tail keywords now stood a chance to shine. They started getting clicks and impressions. They started converting into leads. And this was something we did not only with their ACT services, but with every tutoring service they offered, up and down the campaign.

So, what were the results?

We saw a 5.2% increase in the Lead-Through-Rate for the two campaigns we tested vs. the other 7 campaigns we had running. This means that when someone landed upon our client’s website through our ads, they were 5% more likely to become a lead with the new structure vs. the SKAG structure. In essence, giving these long-tail keywords a shot was worth it in the end.

It may not seem like a lot, but if your business has a high margin for its services—in this case, the tutoring services can amount to thousands of dollars per year—you can really see an effect on your ROI. If 1000 people click on your ad, and 5% more of them turn into leads, you could potentially turn these 50 prospects into thousands in revenue.

The “Science” of PPC

If we learned anything in this “trench” of digital marketing, it’s that what works in theory and what works in practice are very different things. We listened to all the expert advice, and it ended up steering us in the wrong direction. And this is the point I want to nail home: at its core, PPC is not an exact science. The crucial thing to remember is that every campaign is unique, and every business will need its own tailoring. We are constantly learning new things about what the “best practice” is with PPC. It’s an ever-changing target. We started with the commonly held belief that SKAGs were best. But, after looking at the data, we found this wasn’t the case.

If there’s one thing you take away from this article, let it be this: local campaigns with small budgets have to be treated differently than larger campaigns with larger budgets. Even more so for us, our software needed the most data points available to make the smartest bidding decisions possible, so the effect on performance was even more pronounced. And while this may be the best practice today, it may not be the best practice tomorrow. All we can do is listen to the story the numbers tell us, and try to make the best decisions possible based on the data.

Matthew Reitz
3 posts
Matthew is our in-house PPC expert, with experience running thousands of campaigns across Google, Bing, Facebook, LinkedIn, Bing, and YouTube marketing channels.
Previous Post
It’s Time To Start Thinking Of Google As Your Homepage
Next Post
Your Most Powerful Tool On Google Is Free

We use cookies on our website to give you the most relevant experience by remembering your preferences and repeat visits. By clicking “Accept”, you consent to the use of ALL the cookies.
Cookie settingsACCEPT
Manage consent

This website uses cookies to improve your experience while you navigate through the website. Out of these, the cookies that are categorized as necessary are stored on your browser as they are essential for the working of basic functionalities of the website. We also use third-party cookies that help us analyze and understand how you use this website. These cookies will be stored in your browser only with your consent. You also have the option to opt-out of these cookies. But opting out of some of these cookies may affect your browsing experience.
Necessary Always Enabled
Necessary cookies are absolutely essential for the website to function properly. These cookies ensure basic functionalities and security features of the website, anonymously.
Functional
Functional cookies help to perform certain functionalities like sharing the content of the website on social media platforms, collect feedbacks, and other third-party features.
Performance
Performance cookies are used to understand and analyze the key performance indexes of the website which helps in delivering a better user experience for the visitors.
Analytics
Analytical cookies are used to understand how visitors interact with the website. These cookies help provide information on metrics the number of visitors, bounce rate, traffic source, etc.
Advertisement
Advertisement cookies are used to provide visitors with relevant ads and marketing campaigns. These cookies track visitors across websites and collect information to provide customized ads.
Others
Other uncategorized cookies are those that are being analyzed and have not been classified into a category as yet.
SAVE & ACCEPT